To Mark Zuckerburg, CEO of Meta Platforms, including Facebook

Everyone deserves a life of peace and dignity. But, for the Rohingya Muslim community, a chance at a decent life is something they have to fight hard for.

In 2017, anti-Rohingya violent hate speech ran rampant across Myanmar. Online, this was exponentially amplified by Facebook's algorithms. The company also sold paid ads to the military and ultra-conversatives where they could sew seeds of hate and disinformation against the Rohingya across the platform. Groundbreaking reports reveal that not only did Facebook know, it decided to do nothing about it. [1]

Now, Rohingya campaigners living in refugee camps are calling on Facebook today - on International Day of Commemoration and Dignity of the Victims of the Crime of Genocide and of the Prevention of this Crime - to help repair some of the damage they caused, by funding a community education programme in their camps.

Facebook Inc (Meta) has already admitted the role the platform played in stoking division and spreading hate targeted towards the Rohingya community in Myanmar in 2017 - all while their profits soared. But even though Facebook has admitted that they were at fault, they’re refusing to fund the education programme, hoping this all passes without much fuss. [2]

Facebook is headquartered here in Ireland, and while Myanmar is 8,973 kilometres from Ireland, Facebook was deciding and implementing policies that would be rolled out in Myanmar. Not only was data from Myanmar stored in Ireland, even social media posts in Myanmar were moderated in Ireland.

Facebook has denied adequate support to the Rohingya. Now, they're looking to our politicians here in Ireland and beyond - to hold Facebook accountable and support the Rohingya as they seek justice.

A huge petition signed by thousands of people in Ireland will show Facebook that they won’t be able to make this go away - and could be enough to force them to act quickly.

They are calling on Meta/Facebook to pay reparations so they can fund educational initiatives. They want Facebook to:

Because the Rohingya people deserve justice and recognition of the role played by Meta in igniting the hatred they have endured
Róisín
If big organisations want to dodge their responsibilities, how can we expect smaller orgs to do so?
David
Thanks 👍
K. K
Sign the petition and demand that Meta CEO Mark Zuckerberg agrees to the Rohingya community’s demand for reparations from Meta now. With your signature, we will show a collective demand for Meta to do better, starting with providing reparations to the Rohingya. With enough global pressure, we can hold Meta accountable.
Sayedul
Justice for genocide.Not happen again around the world any humans .
Mohammed
Thanks for signing! Your signature has been added.

Next step - spread the word

Fair play for standing in solidarity with the Rohingya. Can you increase your impact by asking your friends and family to sign in solidarity too?

Facebook, fix up what you owe to the Rohingya 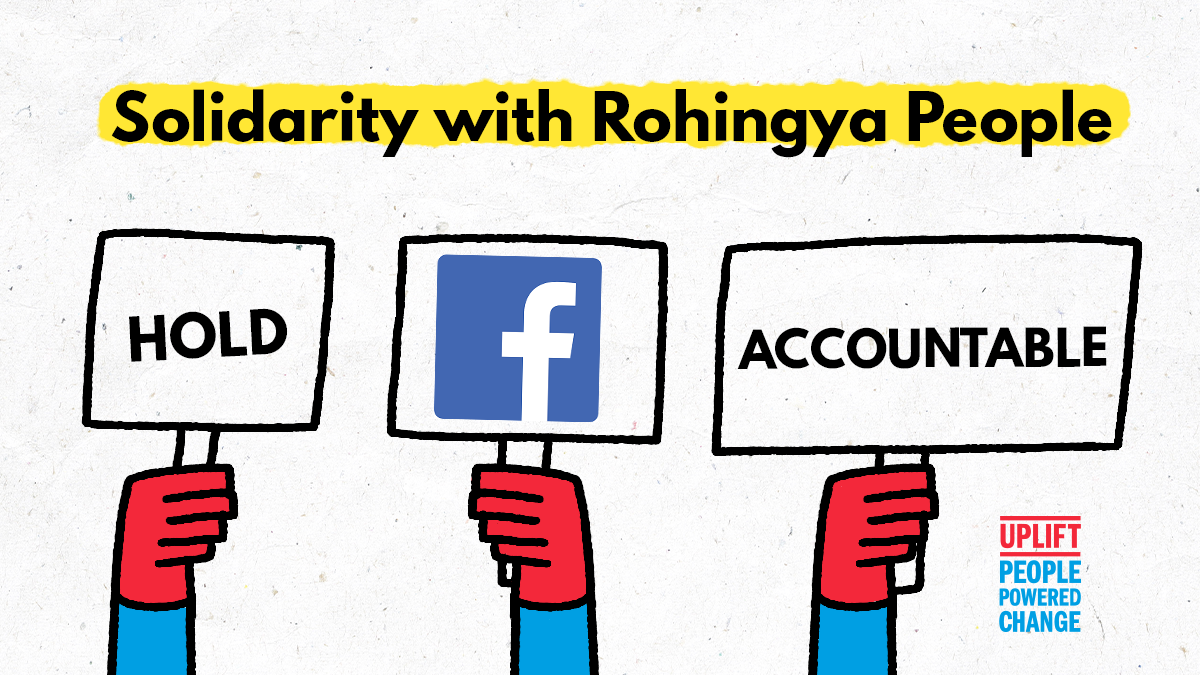 Facebook @Meta is refusing to pay up for the horrific atrocities to the Rohingya community it helped to incite. Rohingya campaigners are taking them on - demanding a fraction of Meta's profits as remedy to fund educational projects #RohingyaReparations

Skip this step
Fair play for taking action in solidarity with the Rohingya who are seeking justice from Facebook.